To dovetail and rationalise resources, Enhabit has now been merged with others in the Efficient Building Solutions group including QODA Consulting, Green Building Store & Green Building Renewables. Find out more.
×
Enhabit Blog » Living in a Passivhaus

Living in a Passivhaus

We moved into our new house in July 2018. It’s not quite a certified Passivhaus as we missed the airtightness target (long story), but it’s compliant in every other way.

So, what’s it like to live in an almost-Passivhaus? Well, after the initial excitement of moving into a new house, I’m afraid to say that it’s actually, umm… just a little boring.

They are always between 20 and 22 degC. Always. There’s no waking up early and tiptoeing to the bathroom through a freezing cold house, no coming home from work early and having to put the heat on and no arguments about whether to put the heating on or off – because it’s actually hardly ever on. When it is on, it’s a very gentle underfloor heating (on the ground floor only) powered by low temperature water from the Air Source Heat Pump which slowly raises the temperatures. We’ve taken the winter duvet to the charity shop – as we’re never going to need it again. Here’s a chart showing the average daily temperatures in December and January, overlaid with the heating hours (note the dates are in US format): 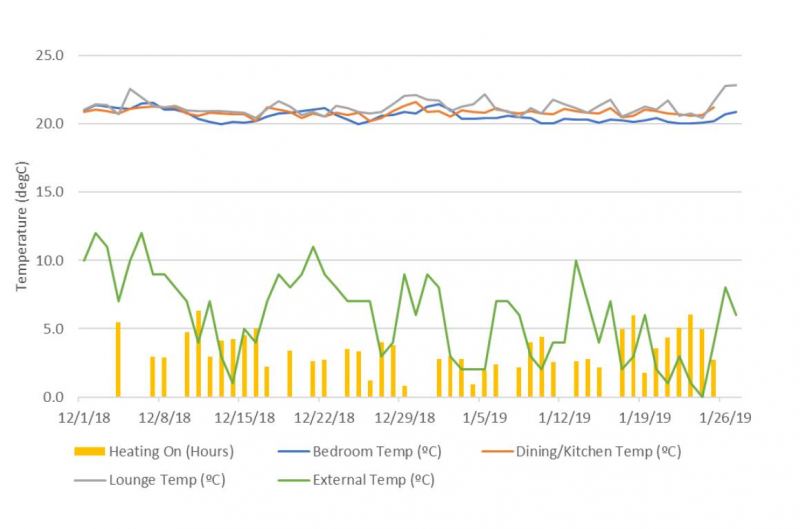 The total heating demand over these two months was around 430kWh which, with the ASHP averaging out at a Coefficient of Performance of around 2, works out at £30, or an average of 50 pence per day.

Next, is the air quality

Friends and neighbours come round to see the new house and we proudly show them the MVHR unit. “Wow!” they exclaim, looking at it with raised eyebrows. “What does it do? Is it on?”. Having explained that it supplies constant fresh, filtered and warmed air to the house at 120 m3/hr 365 days per year and 24 hours a day with an average power consumption of about 15W (about the same as a single light), they seem vaguely impressed. “But is it on?”. The problem is that it is so quiet and the constant delivery of fresh air so unnoticeable that it’s a bit boring – it just sits there quietly doing its job. What is noticeable is waking up in the morning with the windows shut and smelling fresh air from outside. At the other end of the smelliness scale, cooking spicy food used to be a multi-day experience with the whole house smelling of pungent spices for days afterwards – now it lasts maybe an hour or so and then we’re back to normal. What we do notice is that the bathrooms are bone dry within about an hour of showering, and any washing we hang up dries within a few hours. This chart shows the average humidity levels in December and January (dates in US format): 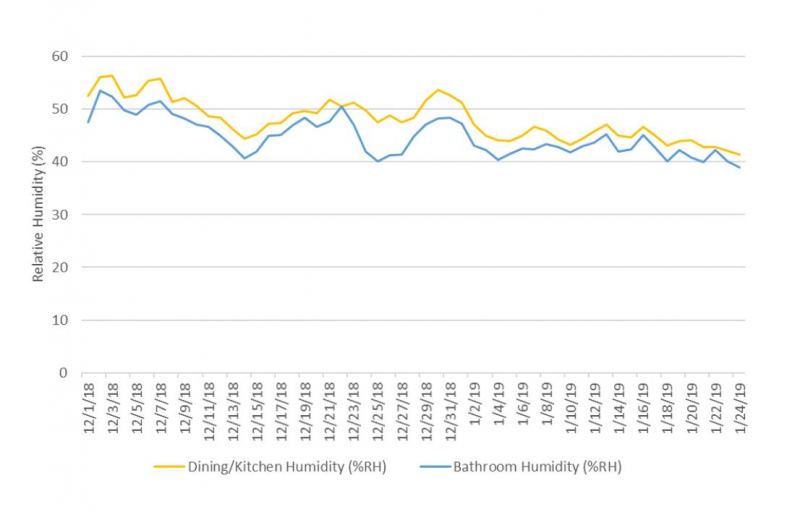 In the summer, when it was very warm, we opened the windows at night. I can confirm that the MVHR did not explode and the house did not implode. Everything was normal – we had a nice cool breeze and once the house had cooled down, we shut the windows again and the MVHR kept everything ticking over at a comfortable temperature.

The airtightness and triple glazing means that outdoor sounds rarely penetrate into the house. Gone are the days where we lie there late on a Friday night listening to drunken revellers making their way back from the pub, or get woken up by the cat having an early morning fight with an enemy cat from across the road. Although there is a faint ‘click’ when the airtight cat flap snaps shut after the cat dives back into the house. The unintended consequence of all this silence is that you become much more sensitive to noises inside the house. I can lie in bed and hear the quiet hum of the dishwasher in the kitchen and my teenage children find it very frustrating that creeping around the house for a midnight raid on the fridge has become much more difficult to achieve without their mother noticing. 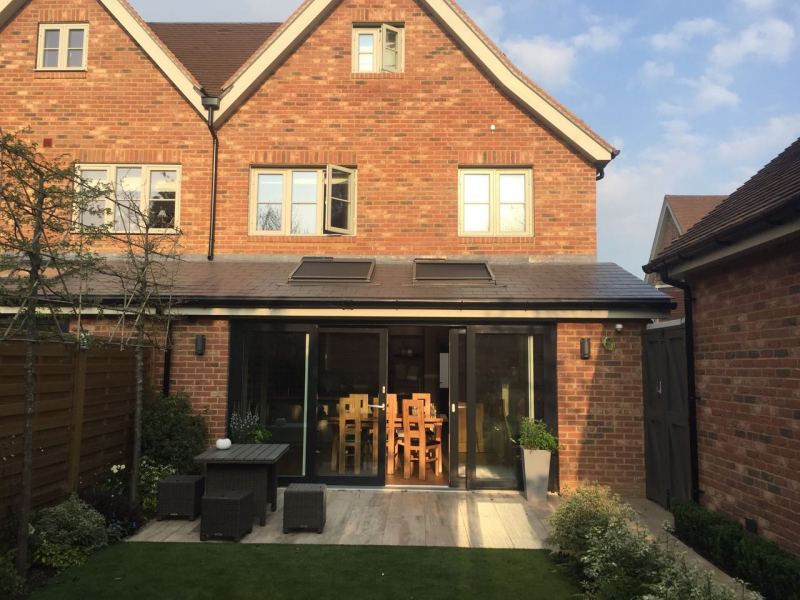