To dovetail and rationalise resources, Enhabit has now been merged with others in the Efficient Building Solutions group including QODA Consulting, Green Building Store & Green Building Renewables. Find out more.
×
Case Studies » Healthy air for a family home with an Enhabit-designed MVHR system

Enhabit was contacted by a young family in Thorpe, Egham who were undergoing a significant property renovation and extension to their home. Because the renovation was going to make the home much more airtight and well-insulated than previously, upgrading the ventilation to a whole house mechanical system was paramount.

The client requested that Enhabit prepare a quotation for an MVHR system, but also provide an informal review of the competitive quotations from other MVHR suppliers they had received. As a low energy building design consultancy first and foremost, Enhabit has worked with many of the most well-known MVHR manufacturers. A Zehnder Q350 ComfoAir unit with ComfoTube radial ducting was eventually specified, ticking the box not only for cost but more importantly for the superior performance and energy efficiency of a Zehnder unit.

Taking outside 0DegC air and heating it up to 18DegC

The Zehnder Q350 heat exchanger operates at a heat recovery efficiency of 92% in best practice conditions. This means that operating at its maximum efficiency it can take in outside air at 0DegC and warm it up to 18DegC by exchanging it with the internal room temperature extracted as waste air (at 20DegC). This means the home heating system has to work a lot less hard, whilst simultaneously providing healthy levels of ventilation. What’s more, the electrical energy used in running the fans is the equivalent of a single light bulb. This is the ‘passive’ aspect of low energy building.

Enhabit designed, installed and commissioned the system over a six-week period. The system uses very simple controls to maintain air quality, mostly automatically. The MVHR system can be placed into ‘boost’ mode during periods of heavy cooking or washing, but generally it operates in the background near-silently.

Enhabit commissioned the MVHR system in September 2017 and feedback from the client over the three months since moving in was positive. The client highlighted that air quality and comfort have significantly improved since installing the MVHR system, and they would recommend it to friends and colleagues if they’re renovating their own homes. 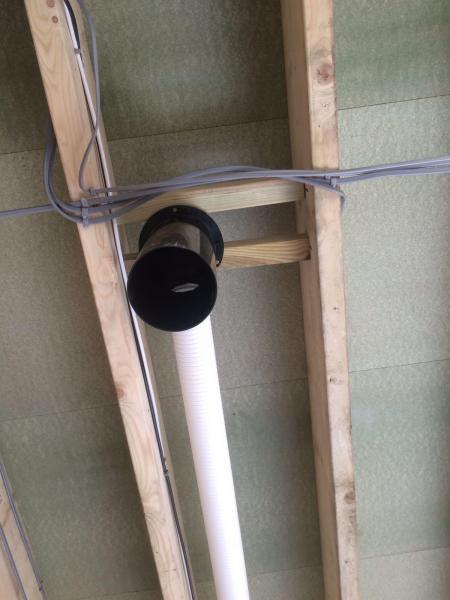 Related Case Studies
Ringmer Passivhaus
Enhabit’s clients wanted to build a comfortable and healthy home, ensuring that the temperatur...
More Info
Oxfordshire low energy, high comfort home off the grid
Enhabit was engaged by this client for the rebuild of her home in Oxfordshire. The house is off the ...
More Info
Tunbridge Wells high comfort, low energy home
Our brief for this project was simply to convert a cold and draughty 1970s terrace into a warm, comf...
More Info
Explore similar projects by category
Company Registered at: 85 Great Portland Street, London, England, W1W 7LT. Company no. 05724543, VAT no. 228 0141 43, Copyright © Enhabit 2022